Our History and Building

Elm City Rehabilitation Center, a not-for‑profit organization, was founded in August 1959. Elm City Center has been at its current location on West Walnut for over 30 years and has been a Jacksonville Chamber of Commerce member since the early 1970’s. Vocationally oriented, ECC helps people with disabilities be independent and live in the community.

By: Mark Gillespie and Vi Hutton 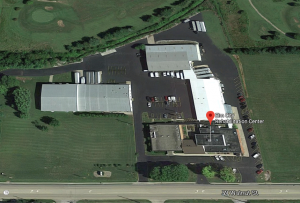 Elm City Center began in 1959 when Robert Manlove, a counselor with the Illinois Division of Vocational Rehabilitation, met with Jacksonville educators Robert Blazier and Harry Emerick. They began to plan to rehabilitate people toward community living. Soon Jackie Hanback joined in working with them. From their discussions came the concept of the Elm City Center we know today. By using volunteers and school classrooms during the summer, they began teaching vocational and daily living skills to 8 individuals. We became a 501(c)3 organization on May 27 1971.

In 1959 the first space was rented above the Times Theater. There were many moves until in 1974, the City Council voted $40,000 in revenue sharing funds for Elm City to buy the WJJY TV building on West Walnut. Today, Elm City sits on 14.5 acres with approximately 100,000 square feet under cover.

The Social Center was originally on East State Street but in 1995 the Illinois Power Building was purchased. In 1998, the Social Center was named for Clyde L. York, a long time supporter and member of the Board. The Social Center was open Monday – Friday in the evenings. Individuals could go to cooking class, play bingo on Wednesday nights, watch TV, play pool, use the computers, exercise, do crafts, play cards or board games. Staff was on duty to serve drinks and free meals were offered several times a month.

Morgan County Housing has 3 brick homes and a 10 unit apartment complex that were especially built for Elm City Center Individuals. We also work with people who have their own apartments throughout Jacksonville. In 2012 we opened our first CILA residential program for people who moved from JDC once it closed. Since then we have opened two more CILAs.

We also work with many people living independently in over 20 apartments or thier own home throughout the Jacksonville area. We currently provide services to people living in Morgan, Sangamon, Pike, Green, Cass, and Scott counties.

The Main campus houses the offices, warehouse, docks, vocational training and classrooms. There are several training kitchens where individuals can learn cooking skills to help them live independently in the community. Vocational training is an important part of training for our individuals and one they enjoy the most. We contract with area businesses to provide paid work and a paycheck for our individuals. The products we assemble for them are sold throughout North America. People are taught appropriate work habits including: appropriate dress, proper procedures for calling in, putting in for time off, appropriate break room behavior, quality assurance of product, and work skills needed to complete a variety of tasks. They have the opportunity to learn to bale, mow, janitorial skills, collate product, shrink wrap, shred paperwork, etc.

In the classrooms individuals learn academic, social, leisure, communication, and independent living skills. Volunteering is something most of our individuals like to do. It helps to improve their self-esteem, teaches them to give back to the community and involves them in the community in a positive way. We have had several 4H groups, involved yearly in the Morgan County Fair, an active Aktion Club, several Relay for Life Teams, our individuals bag the sand for the Relay for Life luminaria’s, Salvation Army bell ringers, involvement in hat and diaper making for overseas, sending packages to soldiers, gathering food for the food bank, decorating trees for Festival of Trees, making blankets, raising money for the Raptor Center and gathering school supplies for those in need. We are very proud of our Volunteer efforts by our Individuals and by the Staff.

We have many people to Thank for making Elm City Center what it is today: First off Robert Manlove, Robert Blazier, Harry Emerick and Jackie Hanback for their vision in getting Elm City Center started. In 1968 and 1969 when payroll required borrowing money, Mr. Arthur French, who was head of Farmer’s State Bank, was there helping, encouraging and supporting the Center. The Cody family for years at Christmas time had a party for our Individuals. They served drinks and cookies, sang carols and even had Santa. This was an event our individuals really looked forward to. Their continued involvement in the Center is greatly appreciated. Every year we have a golf tournament to benefit the Social Center. The golfers who continue to return every year, the businesses that support us by being hole sponsors, towel sponsors or prize donators are all greatly appreciated. We couldn’t do it without them.

Buildings often have a past that is very different from current operations. Believe it or not, our Admin building used to be the home for WJJY-TV in 1969-1971 which served Jacksonville, Springfield, and Quincy. WJJY-TV was the most powerful TV station in the nation and one of the tallest structures in the hemisphere.  On Columbus Day, 2014 we were visited by J. Mitch Hopper who was one of the first employees and worked with Chief Engineer, Harold Eskew in mounting equipment, running wires under the control room floor, installing many of the thousands of connectors. He also installed the basic telephone system we still use today. He stayed with the station as a staff engineer/technician and ran many of the on-air shifts as well as being the primary film editor. He has a website: http://www.brainmist.com/wjjy_tv/wjjy_tv.htm that talks about the station’s history and how they went out of business. Their studio was located where our lunch room currently exists.  The real floor is 3 feet below the current floor which we raised when we built the lunch room several years ago. The engineering room is now a large meeting room. The base of the relay tower that sent the pictures to the transmittal tower in Bluffs still exists on our property. Years later, the Bluffs transmission tower crashed down during an extremely heavy ice storm. Elm City bought the TV property and moved in after it had been empty for several years. Will Elm City still be here 45 years from now? What do you think people will say about us then?