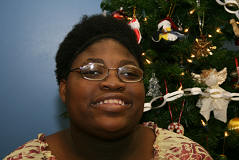 Richard Larkin from Special Olympics called and said Keisha Rout has been nominated to go to Seattle, Washington as a Special Olympics 2018 track athlete. Being nominated does not mean that she will be chosen. Many are nominated but obviously it’s an amazing thing to even get a nomination at all. She would attend one (maybe two) athletic camps in Bloomington prior to the 2018 event. Transportation and cost of these camps would be paid by Special Olympics. After completion of camp she would then fly to Seattle, Washington with other athletes and some Special Olympic coaches from this area that she will meet at camp. Airfare and all expenses again will be paid by Special Olympics and all she would need would be spending money. This is a great nomination. Keisha deserves a pat on the back for all of her hard work and we should all be proud of her. Hard work and effort does many good things. Congratulations, Keisha!