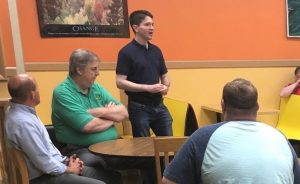 On June 19, 2019, State Senator Steve McClure came to Elm City Center for a tour and visit the AKtion Club. He explained how a State Senator is different from a State Representative and why it is important for everyone to vote. He gave a very nice summary of the new state budget and we had a discussion on how that will affect Elm City. The AKtion Club members had a lot of questions on how the state fixes roads and what will happen when the new minimum wage starts in Illinois. Steve was able to explain how he was able to get $233M for our area for roads and bridges. Before the meeting, Senator McClure went on a tour of our buildings with our CEO Tom Frederick where he met people working on production jobs and other activities. We had a serious talk about state rates to community providers like Elm City because the rates have not increased in over ten years.